The hits just keep on coming here at VMworld 2017.  Lots of big announcements and great sessions today.  VMware Cloud on AWS is a big focus this year and you can expect to see continued integration points between VMware and Amazon (as well as other cloud providers).

When the rumblings of this offering started making their way around the horn, I heard a lot of people asking (mostly sincerely, sometimes just snarkily), “why would I run VMware on AWS instead of just using AWS?”  I think this comes from orgs who fall into one of two boats:

Notice we are missing larger customers who have legacy apps but are truly interested in leveraging the cloud for services or availability.  VMware Cloud on AWS helps to bridge a painful gap in cloud adoption for people who want to move but aren’t ready or comfortable with native cloud deployments.  It lets you leverage standard VMware SDDC technologies (ESXi, vSAN, NSX, vCenter) that you are probably already familiar with and have deep skill sets on the team, but in a public cloud environment.

VMware Cloud on AWS is powered by VMware Cloud Foundation which makes the initialization of the environment very fast (entire data center ready in a few hours), and on-demand expansion even faster (add hosts in minutes).  The hosts are not virtualized ESXi hosts, but instead run on baremetal in AWS.

The environment is fully supported and managed by VMware (one support number for all issues – VMware direct), including 24x7x365 unlimited support, live chat options, and fully managed upgrades.  This last part is pretty awesome as anyone with an extensive vSphere environment can attest to.

Because this is a true vSphere environment and not some proprietary recode, any of your existing tools and solutions that work with your private cloud should continue to work with VMware Cloud on AWS.  The VMware tool stack (vRealize Operations, Automation, etc.) will simply point at your AWS vCenter instance.  Any 3rd party tools or coding platforms like PowerCLI will be much the same (side note: new version of PowerCLI will have some additional VMware Cloud on AWS cmdlets).  And you can leverage hybrid linked mode to connect your on-prem and cloud vCenter instances for true single pane of glass management.

Here is a list of features available today, with more to come obviously:

cloud.vmware.com will be your portal to this along with other VMware cloud services.  They will have status updates of service availability which you can also subscribe to for maintenance or outage updates.  You literally just click “create SDDC” and your data center will be provisioned.  Same with adding hosts, or removing hosts.  The portal also has a simplified view of NSX network provisioning which should be more easily consumable by VMware admins who might not be fully up to speed on the NSX platform.  There is a Connection Info screen which shows links to vCenter, vCenter API explorer, and a handy PowerCLI connection string as well.

Lots of tech partners have already tested and certified their product for VMware Cloud on AWS. 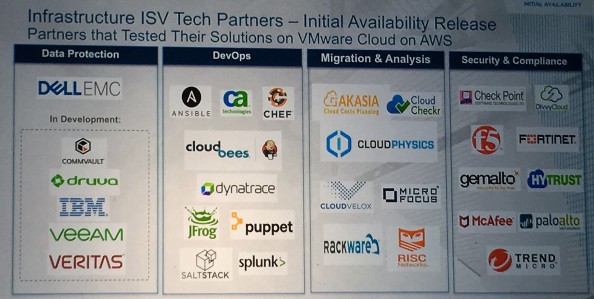 Here are some highlights for me personally.

This looks like an interesting offering – not for everyone but an extremely nice option for a lot of customers eyeing hybrid cloud deployments.